Difference between IDS and IPS

The Main Difference Between IDS and IPS

With the advanced technology in cybersecurity, having advanced knowledge with technical terms in the technology sector is required. The two technology terms are referred to as Intrusion Detection Systems abbreviated as IDS and Intrusion Prevention Systems abbreviated as IPS. Your security team of professionals must be able to identify and know the difference between the two technological terms and how they work. With this knowledge, your organization will be kept secure from cybercriminals.

The main difference between the two security systems is that one monitors while the other controls. IDS system security doesn’t make any changes to the packets but scan them and check them thoroughly through a database for any threats. The IPS security system does prevent any packages from being delivered into the system network.

Intrusion Detection Systems monitor and scrutinize network traffic for malicious invasion and packets into the network. The IDS then flag out any known attacks and hacking methods. It is able to detect the following; -

Intrusion Prevention Systems are located in the same place as the firewall of which are between the internal system and the outside internet. As IDS flags out any known threat then the IPS will ensure the threat is shut down completely and make sure malicious packets are not delivered. You will discover that some manufacturers prefer merging the two security systems into one forming a solution referred to as Unified Threat Management.

The Importance of IDS Vs IPS, What is the Difference and how they operate?

These two security systems are the most fundamental factors when it comes to securing a network. They work closely together to keep away cybercriminals from attacking either your personal or enterprise network.

Intrusion Detection Systems tend to look for any malicious network traffic and later on compare it on a database for any known threats. If malicious behavior tends to match any known threats after being compared against a database, the IDS flags down the suspicious traffic. This process either requires an application or a human who will monitor, analyze the results and finally take action 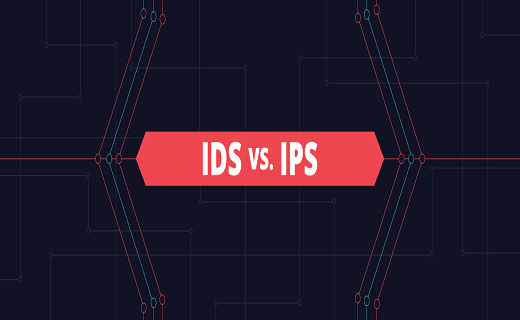 Intrusion Prevention Systems work dynamically to keep any known threats from attacking the network systems. Based on a specific rule set, the IPS will either reject or accept network packets. This process is quite simple for instance; if the packets prove to be suspicious based on the specific ruleset, the Intrusion Prevention System will reject them. This will, in turn, ensure the suspicious traffic does not reach the organization’s network. This system also needs a database that’s frequently updated with advanced threats profiles. In as much as they have almost similar names, they differ in some ways. Below is a discussion on some of the differences.

In as much as they both detect threats and analyze them a difference comes in the steps that are followed through this identification. These differences include;-

As much as the ids & ips provide the security they both don’t have the feature of “set it and forget it” Any user using this type of security system should know that they only scan against security breaches that are known. These security tools need to be updated to date. Once they are updated the security system tools perform quite effectively. I'm scanning for known threats.

Not only do ids & ips detect, analyze and prevent intrusions but also give your security team peace of mind. They don’t have to sit in front of a computer all day long monitoring traffic.

What is SIEM Security?

PARTNER WITH US
REDIRECT NOTICE